When Fernando booked us a camping site at the Grand Canyon a couple of months ago, I was beyond thrilled! For years I had wanted to go, but other trips and things had come up. It’s at that distance (8-hour drive) where it’s doable but still far, and it seemed we never had the time, until now!

The night before our trip I prepared some homemade zero waste food items. It took me about an hour to make a walnut milk, carrot top and kale pesto, and some power balls made mostly with the walnut milk pulp. The walnut milk was for oats, power balls to snack on, and the pesto to go with pasta. I probably would have bought some prepared food items in recyclable containers if I didn’t have the time to prepare, but I had time to prepare so I prepared!  I didn’t pack a lot of food for this trip because I knew we would be stopping for food on the drive there and back, and Fernando had already picked out a restaurant he knew I’d like in Sedona, so we only really needed 2 breakfasts and 3 meals. I packed oats, veggies, dehydrated bulk bean soup, pasta, spices, and sunflower oil.

While I prepped our food and packed our kitchen utensils, Fernando packed our bags and gear, including 2 tents just in case (because Fernando is obsessed with our second-hand tents). That night I was singing “We’re going to the Grand Canyon” for most of the night. Not a real song, just something I made up because I was so happy. In fact, I couldn’t sleep from the excitement, I felt like a kid on the night before going to Disneyland.

The next morning as soon as our alarm went off at 4:30 am I jumped out of bed and into the shower, the sooner we were ready the sooner we’d be there!  An hour later we were showered, the car was all packed up, and we were ready to go pick up our rental car. We decided to rent a car for a couple of reasons. 1) Our electric car has a 125-mile range and the trip was 1,100 miles total. Plus it’s a lease with limited mileage. 2) Our second car is borrowed from Fernando’s dad and we don’t want to overuse it. When we got to the cool new LEED Certified San Diego Rental Center we were unfortunately not able to rent the car like planned. Neither of us has the stupid credit card required for locals. I don’t have one because I finally paid off my credit cards earlier this year and vowed to never again go into credit card debt, and Fernando’s just never had a credit card, he’s always been good with his money, unlike my former self. Fortunately, my sister would be able to help us….but we’d have to wait 2 whole hours for her to arrive. If this would have happened two years ago it probably would have ruined my whole day, but I’m a lot better at not reacting negatively when things don’t go as planned, so it wasn’t a big deal. While we waited we drove down the street to the beautiful San Diego harbor and walked for a bit along the water until my sister gave us a call, she was on her way. She arrived, we got the car, and by 8:30 we were on our way Northwest!

We ate our overnight oats at 6:30 am, so by 10 am we were hungry again. Fortunately, I found the perfect little spot in Riverside, California for our second breakfast/early lunch, Oasis Vegetarian. From the pictures I saw online, it looked like they would only have disposables, so I brought our two camping plates and kindly asked the woman if they could serve our food on them. I was worried she’d say no due to health codes, but she said yes! I got the vegetable patty and roasted vegetable tacos and Fernando got the “carnitas” burrito. My only regret the whole weekend was not getting that burrito myself. 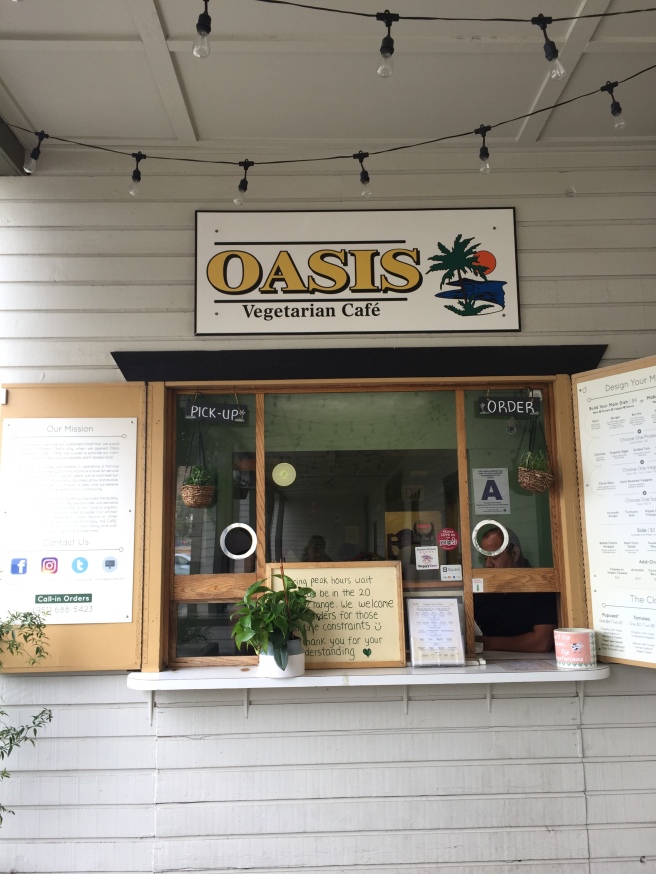 The rest of the drive to the Grand Canyon was pretty uneventful. We thought about stopping to get plastic-free firewood somewhere along the way but in the end decided it was better to buy it where you burn it, even if it came in plastic. We stopped a couple of times to let Apolo out for pipi popo, fill up on gas, and refill our water bottles at the gas station soda fountains. The landscape soon enough changed from hot and arid to cool and green, we were approaching the canyon!

Arriving at the Grand Canyon National Park reminded me how much I love our national parks. Clean, organized, and very educational. We arrived just before sunset, the perfect time to get a first glimpse of the canyon. We parked at the main visitor center and walked among the crowds of visitors speaking Japanese, Spanish, and German to one of the most popular lookout spots, Mather Point. After a short walk, it was there, the rim of the Grand Canyon. It was everything and more than I had imagined. It was breathtaking and I was so happy my eyes even welled up a bit at the majestic sight.

After soaking it all in and walking around the rim for a bit we left to set up our camp, stopping at the General Market to pick up some beers and expensive plastic packaged firewood. We unloaded our things at the Mather Campground Oak Campsite #1064, pitched our tents, made a fire, cooked our pesto dinner and went to bed. We were both tired from waking up early and driving all day, but Apolo was not. He had ALL the energy in the world. Afterall, he had slept all day in the back of our Nissan Rogue. Not only was he wide awake, he was too curious about the yapping coyotes and other sounds of the night, it was nearly impossible having him stay put inside the tent. Needless to say, I did not sleep well that night.

The next morning we got up, had breakfast, and made our way to the rim to catch a 9am Fossil Talk. Parking was terrible, we arrived late but were still able to take part in the fossil talk and hunt. This whole weekend had me thinking about earth’s history, humans, and how much damage we’ve caused in our short time here. Talking about fossils definitely had something to do with that. After spotting a few shell and sponge fossils on the rocks, we started our planned walk westward along the Rim Trail. Along the Grand Canyon’s Southside, there’s a 14-mile trail with many viewpoints along the way. Most people take the free shuttle that goes parallel to the walking trail, but we wanted to walk and Apolo wasn’t allowed on the shuttle bus anyway. We walked and talked, marveling at the beauty around us, and stopping at every viewpoint. A few times Fernando asked a stranger to take a picture of the two of us with the canyon in the background, not necessarily strange behavior, but he was doing it more than usual. Turns out he was a man with a secret plan. On one of those picture stops Fernando says to the nice man taking our picture, “wait, one more”, he then reaches for something in the backpack pocket, gets down on one knee, looks me in the eyes and says…. “Amor, quiero pasar el resto de mi vida contigo” (I want to spend the rest of my life with you)!!!

The moment was beautiful and so special, although not necessarily a surprise. We actually decided to get married months ago and decided we wanted to be together forever months before that, that’s why it wasn’t a question, but more of a romantic gesture. It was a special moment I’ll cherish forever.
Also, a few months ago I witnessed from the back seat of the car as his grandmother in the front seat of the same car shows him a box and says, “here’s the ring”. I believed his excuse when I curiously asked what she was talking about, but as he was looking into my eyes and reaching into his backpack pocket, I knew exactly what was happening.

We were both very giddy after that very special moment. We kept walking along the trail with the perfect view, remembering and laughing about that time in the car with his grandmother and when I asked him about it. He also confessed he got very nervous! That’s why he kept asking strangers to take our picture, he couldn’t do it on the first try.

The rest of the day we continued exploring the park, had a couple of beers with dinner at the campsite, had the most amazing hot shower at the campsite communal shower and laundromat station, and marveled at the nighttime sky when we joined the astronomy tour at the visitors center – all while feeling very much in love.

The next day we got up very early, said goodbye to the Grand Canyon, and made our way to Sedona via highway 89A. We were saying ooh and wow so many times along the highway it got to a point where we just couldn’t say it anymore. After the most beautiful drive among pines and tall rock walls, we got to Sedona around mid-morning. Sedona is a charming little town with plenty of vegan and gluten-free restaurants, Native American artwork shops, and a few aura reading places as well. It definitely has the vibe of a place where mystical people converge. Fernando picked out Chocolate Tree for lunch because he knew I’d love their vegan and organic menu, and I did!

After lunch, we went to Red Rocks park just a few miles down the road. Us and everyone else there was very confused by the many intertwining paths. I don’t think we ever got to our intended destination, but it ended up being an awesome time for Apolo. As soon as he saw the creek he made a leap for the water! He was thrilled to be off the leash and running. It was just what he needed before the long drive back home. 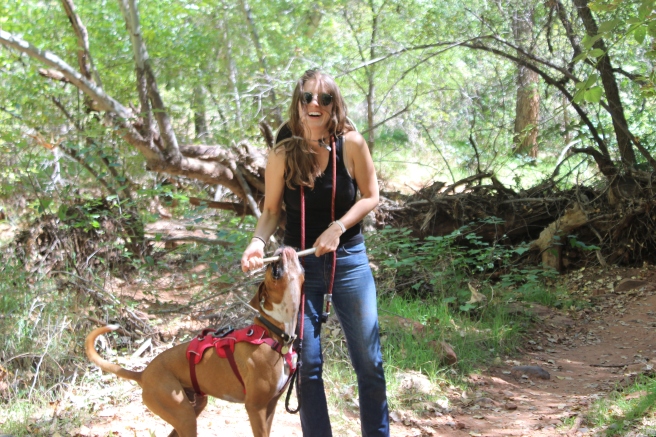 From there we headed to our last stop, Montezuma Castle. There’s not a lot to see, but what you see is quite impressive. The locals built here between 1100 and 1300 a 40-person home on the mountain wall, and most of it is still there. It goes to show the strength and duration of natural building materials! Even though it was a bit expensive at $10 per person for 30 minutes of our time, it was definitely worth it.

Our weekend trip to Arizona is hands down one of my favorite trips ever. The scenery was beautiful, the company was all I wanted, and I will forever cherish those memories.

It was also a very successful weekend in terms of being environmentally friendly!

The trip was wonderful and much better than I had ever imagined! And as always, it made me feel very good we tried our best to protect the very places we go to visit. 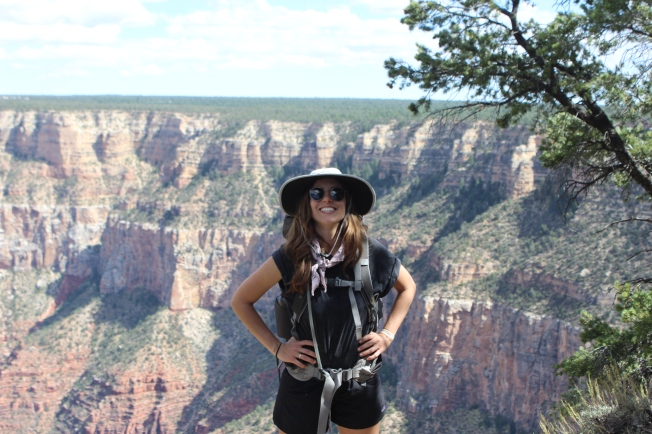