I’ve been using a menstrual cup for over 2 years now, and for the most part, I really love it! I don’t make trash, I save money, it’s convenient, and it’s less toxic for my body. So it’s no surprise that’s what I used for my travels. I want to share my experiences on traveling/backpacking/volunteering with a cup.  All of the good and even some of the bad. Hopefully this will inspire other women to get a reusable alternative to disposable pads and tampons and help them better prepare for life on the road with a cup!

On this trip I brought 2 menstrual cups, 1 small camping pot that I used for boiling it, and all-natural liquid soap in a travel size bottle for washing. I don’t necessarily recommend getting two cups, you just need one, but I bought my second one after having my first one for over a year and thinking I needed to replace it, because I had read that somewhere. Since I was leaving on a long trip I thought it would be best to buy the replacement even though my original still looked like new. What I didn’t bring and wish I had, was a reusable pad or panty-liner for extra protection.

As luck would have it, I started (and ended) my trip on my period. Fortunately, changing the cup on the airplane was totally easy, it’s private and there’s running water. However, on land and on the move it got a little complicated. Immediately after arriving in Bangkok I went to the bus station where I waited 4 hours for my 12 hour night bus to the northern city of Chiang Rai. Needless to say, I had to change my cup. That part was not as easy as on the airplane, but doable! The restrooms at the bus stations had the sinks outside as well as the ones at the bus rest stops. Fortunately, all of these toilets had running water inside the stall (a sprayer/bum gun), so after dumping my cup in the toilet, I cleaned it with water and my Fillaree liquid soap. If you’re concerned about water quality you could use a clean towel or a small amount of toilet paper to clean it.

My second period was much easier. We were volunteering at the New Land Project where I had a lot of privacy to do my thing and had access to a stove where I could boil my cups before using them again. It got a little trickier when we went on an overnight backpacking trip into the woods. There was no running water where we camped so we had to hike in all of our drinking supply. I sacrificed the tinyest amount of my drinking water to clean my cup. It worked great! Using the cup while camping is totally the way to go, I don’t want to leave any trash behind and even less carry out dirty tampons or pads.

Luckily most of my periods fell on dates when we were volunteering and I had easy access to stove tops. Having my own little pot to boil it in made it easy, but I could have done without it. As you’ll read below, my friend Jade used boiled water from 7 Eleven stores.

Period number 3 started when I was doing a silent 10-day meditation retreat. My cups had been boiled after my last period, but I always like to boil them again right before I use it. I didn’t have direct access to the kitchen, and wasn’t allowed to talk, because it was a silent retreat. I thought about maybe writing a note asking if they could boil my cup for a few minutes while I waited, but then decided it wasn’t necessary. So I just thoroughly washed it wish my natural soap and water. It was fine!

Periods number 4, 5, 6, and 7 all came when I was doing volunteer projects, which was super convenient. All but two of these places had a washing sink inside of the toilet. For the one that didn’t, I used the shower to change it out, super easy!  It was also really nice meeting other women who were traveling and volunteering with a cup. I remember asking my Chilean friend Camila at the Mindfulness Project what she was cooking, and having a laugh when she said it was her cup.

My last period started a day before I left Thailand to come back home.It took me about 48 hours to get here, so I’d definitely needed to change my cup a few times. They had showers at the bus station restrooms where I changed my cup and I found a handicap bathroom at the airport that had a washing basin inside of the stall. All in all, traveling with a cup was very successful!

I asked three friends I met while traveling a few questions about their experiences with the cup. It’s always nice meeting other women who use a cup, and even better, who travel with it! Here’s what they said.

How long have you been using the cup?  I’ve been using the DivaCup for about a year now.
How long have you been traveling with a cup? I’ve been traveling with the cup for 6 months.
How do you keep your cup clean while traveling?  During my cycle I use a all natural unscented soap to keep the cup clean. Finding all natural soap while traveling SE Asia has actually been easier than I expected, there are little organic shops here and there in every country I’ve been in. After my cycle I boil it in hot water which has also been an easy task. Almost every place I’ve stayed has had a water boiler. And if your in Thailand there is boiling water in every 7/11 which of course are everywhere. I’ve also used it while camping, I just rinsed it with clean water.
What’s your favorite thing about traveling with a cup? It’s hard to choose one favorite thing about the cup while traveling. First, it saves space! I don’t have to lug around a million pads and tampons. While traveling I’m spending so much time on the beach and it’s so much more comfortable to be wearing a seal tight cup rather than a tampon which would expand in the salt water. Also, this could be quite dangerous, there is a lot of bacteria in the ocean and wicking that up into your uterus cannot be too safe. Also when I do go camping it’s so nice to be able to be carefree and not have to worry about disposing of feminine products. I’m creating less waste. One more thing, I’m backpacking on a budget. I read in one article the average woman spends $400 a year on pads and tampons. I just spent that much in a whole month in Thailand! The DivaCup was $30 and should last between 3-5 years. That’s a lot more travel money saved!

How long have you been using the cup? 5 months
How long have you been traveling with a cup?  5 months – I finally got one right before heading to Southeast Asia
How do you keep your cup clean while traveling?  Boiling hot water and letting it sit for a while. If I can’t access boiling water, I’d give it a good rinse with filtered (bottled) water. Since I couchsurf a lot, access to boiled water wasn’t really an issue. It was only when I got my period in Vietnam, while I wasn’t on big cities, where it was a bit trickier. But, like I said, I just used filtered water to rinse it out there.
What’s your favorite thing about traveling with a cup? Literally not ever having to worry about traveling with enough tampons or being able to buy more. I used to stock up before travels or buy more than I needed for one cycle, just in case I wouldn’t be able to find them later on in travels/I started my period earlier than expected/went through more tampons than expected/etc. Now, none of those factors are ever an issue! One less thing to have to think about while traveling is always a good thing. 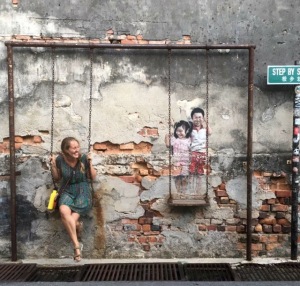 How long have you been using the cup? I’ve been using the cup for almost a year now.
How long have you been traveling with a cup? I’ve been travelling with the cup since I started using it.
How do you keep your cup clean while traveling? I always found a place that has a kitchen facility that I can use to sterilize it at the end of my period, although many times I’ve done this some days or even weeks after it ended. I do carry my own small metal jar to do this though.

What’s your favorite thing about traveling with a cup? The thing that I enjoyed most is not having to worry or even think about buying tampons or if I have run out of them, it doesn’t matter when my period comes, the cup is always in my bag, and it not only saves me money and time, but I also produce less rubbish, which is always good.

For anyone wanting to travel with a cup, here are my recommendations:

In eight months of travel I didn’t buy a single sanitary item and produced zero waste! Using the cup made sense to me, and overall it was very successful experience.

12 thoughts on “Traveling with a Period Cup”