We took the train down from Hat Yai, Thailand to Butterworth, Malaysia. It was my first train ride in the whole trip and it met my high expectations. I was really excited to ride the train! It’s an international train, the train stops at the Thai-Malay border, everyone gets out, goes through customs, and hops back on. The whole process was very simple and I was happy they didn’t confiscate my bananas.

Around 2pm we arrived in Butterworth (isn’t it a funny city name?), and since Fernando had already done the journey the opposite way, he confidently guided us to the ferry that would take us to the small island of Penang. We had just arrived in a new country, and since I’m a big people watcher, I entertained myself during the ferry ride by looking around at the diverse group. A few other western backpackers, Muslim women and girls wearing tundugs (a type of hijab), and ethnically Indian and Chinese Malays. One of the things I love about traveling to new places is being exposed to new cultures and people, and culturally and ethnically-diverse Malaysia has not dissapointed!

At this time Fernando was not feeling well at all. He had a terrible headache and a mild fever, we thought it was just a passing bug, but in the next few days we learned it was something a little more serious…

We soon arrived at the port and walked in the humidity and hot afternoon-sun towards Little India in Georgetown. For months I had been hearing from Fernando how amazing Little India is, the vibe of the place and the delicious and inexpensive Indian vegetarian food. So it’s not a surprise that was our first stop, backpacks and all. Needless to say the food was very good, and for the first time in weeks I felt really full.

Since we got our number one priority out of the way, finding accommodations was next. We hardly ever book a room in advance, but I did do a little research on Agoda and saw there were a handful of cool places that fit into our ~$15 a night budget. So we headed out towards the popular Love Lane, and after checking out a few places and remembering what I already knew, that pictures on booking sites are almost always better than the real thing, we sort of settled for a double room with a private renovated bathroom, AC, fan, and a window all for 60RM or $15. Thinking back, even though the “decor” was not what I wanted, the place was actually a total score. 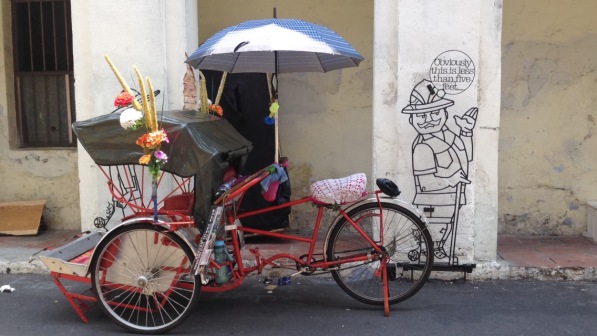 One of the most memorable experiences in Penang  happened on that first night. Fernando was resting so I went out on my own in search of dinner. I was already aware that it was Earth Hour, and thought I’d spend it walking around the city at night and getting street food. But as I walked down the street, I see 4-5 people walking in a hurry and wearing black Earth Hour shirts. I was totally intrigued and excited so I walked next to them, trying to keep up, and asked them what they were up to. Turns out there were hundreds of people behind us, all participating in an annual Earth Hour 3.3 km walk around the city. It was really cool to see, there were families, students, couples, solo walkers, and a few foreigners all being a part of this event. I walked with them for about 1 km, talking to different people along the way; a middle aged banker, two girl college students, and a young family. Just regular Malaysians who wan’t to participate. During my time in Penang I learned it’s an environmentally progressive island, and the Earth Hour event is only one of the things they do to create environmental awareness. (more on this below)

For the next couple of days Fernando’s symptoms would come and go. He would wake up feeling great and as the day progressed his fever and headache would come back. Before going to sleep he would agree to go to the doctor the next day, but then the next morning he would feel fine and thought it was gone. This went on for a 2 or 3 days until he finally gave in and we headed to the local government clinic for him to get checked out.

In the days before the doctor visit we didn’t do much. He wasn’t feeling well and the heat wave made it almost unbearable to be outside between 11am-5pm. We switched hotel rooms to the hostel we originally wanted to stay at. A new hostel that belongs to a friend of Fernando’s. There was a total mix up, it was full, and we didn’t stay at his hostel but the one in front which is currently being managed by him. The hostel was very “cool”, but our 3rd story room in a historic building had no window. It did however have an excellent water filter which I was very thankful for! On one of these days we also went to the movies and watched Zootopia, we loved it and highly recommend it.

It turned out Fernando had dengue fever. It was shocking and scary at first, there’s no medication for it, but we were told and read that with rest and hydration he would be better in a few days. That’s when we moved to our third and final hotel room while in Penang. Fernando was basically bed-ridden for the next few days and we wanted to stay somewhere with a TV so he wouldn’t die of boredom from being in the room all day. We packed again and moved to the Star Lodge into their double room, with private bathroom, AC, fan, and 32 in TV with cable and a wide selection of English channels including National Geographic, Discovery, and HBO movies. This place was also just a few feet away from the clinic where Fernando had to go daily to get a blood cell count. Not bad at all, and only for an additional $5.

Over the next few days I mostly stayed with Fernando in the room, but on some occasions we went out together, or I went out on my own. Here are a few of the places we went to.

I took the 101 city bus from Chulia street all the way to the park entrance.   There’s no entry fee but I registered at the entrance. I took the 3 km trail to Turtle beach through the dense forest until reaching the white, and hot sand of turtle beach. There’s a turtle conservation program in place but unfortunately they are closed for rest between 1pm-2pm, I arrived at 1:20ish, but I was still able to look around. I wish someone was there to answer my questions, I never found out what species of turtle(s) nest on this beach, and why they had 3 juvenile albino turtles in a pool. On the way back it got incredibly hot and humid, I had run out of water, and I was starving, so I decided to forgo Monkey Beach and headed back to the park entrance. It was a really nice time and I’m always happy to support and visit national parks. 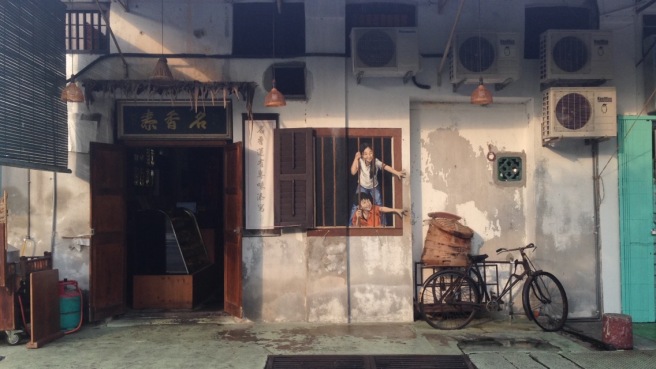 Armemian street is the center of the Georgetown UNESCO World Heritage site. It’s name comes from an Armenian Family that resided here in the early part of the 19th century. I enjoyed exploring the area, walking into shops, and checking out the street art. 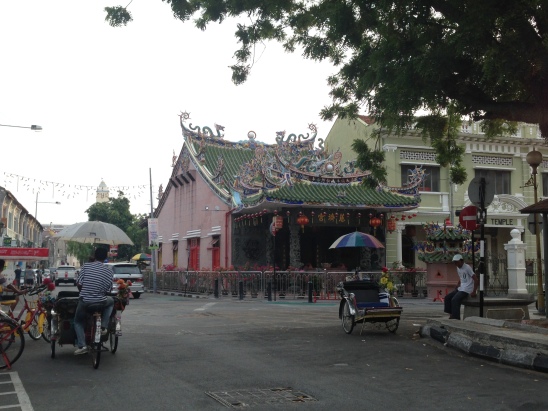 Over-a-century-old Chinese homes on stilts. It’s a total tourist attraction, but people live here like they have for the past 100 years. I walked past many homes and people were just doing their thing. It felt invasive and somewhat awkward, so I only visited one of the seven jetties.

Eating: A significant part of our day

Penang is a worldwide foodie destination. Me being mostly vegan and Fernando being vegetarian, I feel we sometimes miss out on the great local food, but not in Penang! Here are a few of the places we ate at.

It’s a 100% vegetarian restaurant with many options and great prices. I had spaghetti bolognese (a la malaysian) and dumpling soup.

I don’t eat mock meats very often, but I’m still savoring the “chicken” nuggets we had here. SO SO good! 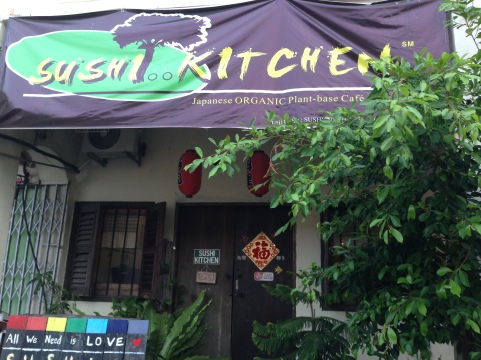 A 100% Plant Based Japanese Restaurant!! The service was a bit slow bit it was completely worth it. I wish for a vegan sushi restaurant in every city of the world.

This is an inexpensive, Chinese, 100% vegetarian restaurant. Fernando had the buffet lunch and I ordered the laksa, a traditional Malay noodle soup. The total came out to less than $3 US.

This was the first restaurant we went to in Penang. The food is really good, it’s authentic Indian, inexpensive, and the portions are big. It was the first time I ate with my hands, as was every one else.

Woodlands is another vegetarian Indian restaurant just across the street from Sri Ananda Bahawan. The food is also good and the prices are a little higher (but still great), but Fernando wasn’t feeling well, and unlike Si Andada’s, Woodland’s has AC.

I was very happy to learn  Penang is an Environmentally progressive state. Here’s Why.

The public bus system is efficient and accessible. If a city wants to reduce their green house gas emissions and traffic, a great public transportation is the key! Penang’s buses were clean, fast, and super comfortable.

Starting in 2011, supermarkets, convenience stores, pharmacies, and department stores charge a 20 cent fee for a plastic bag. The result is more bags being reufsed and more people bringing their reusable bags. Although this doesn’t solve the plastic bag problem, as many other places like food stall vendors, and the produce department still distribute them, it reduces the amount of litter and landfill waste overall.

Although this initiative is health driven, it also benefits the environment. Cigarette butts are the #1 littered item and they are gross! Although many people, including many western travelers, ignore the ban and don’t respect the smoking zones, there are signs in place all over the city. Hopefully people will think twice before they light up and litter their butt afterwards.

Unfortunately this may be because they haven’t made the switch to disposables, but compared to Thailand, Malaysians use more reusables! It’s hot in Penang, and cold drinks can be found on every corner. Yes, they do give to-go drinks in plastic cups or bags with a straw, but many places offer reusables. The same goes for food vendors!

So there you have it! There’s a bit of our 8 day stay in Penang.

I’ll try to write more of these posts not only for what we do and where we go in the future, but also about the places we’ve been to. So stay tuned!