This past weekend, with only 9 volunteers, we removed
864 pounds of trash from a deserted beach!

The idea to do this cleanup arose months ago when my dad mentioned there was a beach south of Ensenada where he remembered seeing a lot of trash. He ventured down there years ago when he used to organize adventure races and recalled seeing mounds of plastic on the rocks, especially motor oil bottles. Finally, one weekend back in September, my parents, Fernando, and I made the 3-hour drive down to check out this beach. Two hours past the Mexican border and 1 hour on a rocky, dirt road, we found a beautiful, long stretch of beach surrounded by rugged terrain and dispersed vegetation. We parked the car near the single group of American campers and walked down to see if the trash was indeed still there. There it was, on the rocks was an endless amount of plastic waste. Countless motor oil bottles, drink bottles, cleaning supply bottles, ropes, and even part of a small boat.

That same day we agreed we’d organize a cleanup. This place definitely needed a lot of help. We set a date, made a Facebook event, and started promoting!

Since the beach is somewhat far away, it made sense to camp overnight, allowing us more time to clean up and to enjoy this beautiful beach. We were all there to clean up trash, so it also made sense to organize a Zero Waste camp. In the Facebook event, I asked everyone to reduce the amount of waste produced while there, to avoid bringing disposable plates and cutlery, and that styrofoam (common in Mexico) was banned!

It was also important that volunteers knew this wasn’t a regular cleanup. SUVs or trucks were needed, it was in a remote location, and that we’d be camping without running water or toilets. This would limit the number of people we’d have, but we still had quite of bit of interest.

While doing outreach for the event, my friend Mariana got me in touch with Efrain, an environmental lawyer with CostaSalvaje, an awesome international Environmental organization with its Mexican headquarters in Ensenada. Efrain was 100% on board with providing support for the event in the form of outreach via their networks, a 4×4 vehicle, cleanup supplies, and PR post-event. At the same time, my dad, who works for the state of Baja California, was coordinating with the local government to have a truck come pick up the waste. We still had the issue of finding where to take the recyclables, but fortunately, Naro of Pro-Recicla (a recycler in Ensenada) got in touch with me just in time. Naro also lent us these huge reusable trash bags, which were awesome, and smaller thick plastic bags. That, along with the onion sacks we got from the market and the buckets Efrain bought, we didn’t have to buy any new plastic trash bags.

After much anticipation, the cleanup date finally came. I had a few people cancel that morning and the day before, and to be honest, I was briefly disappointed with the turnout. But I was happy and grateful to have my parents and Fernando there. I knew that even if it were just the 4 of us, we’d be picking up a lot of trash. But it wasn’t just the 4 of us, we were joined by Efrain, my  aunt Sonia, my friend Courtney, and a Colombian couple, Andres and Vanessa. We also had FOUR dogs with us, which made the trip that much more fun.

The meeting point was at the volunteer fire station in front of the La Jolla Beach Camp, about 30 minutes south of Ensenada. Fernando, my parents, and I arrived promptly at 9 am and got breakfast while we waited for everyone to arrive by 10 am. Eventually, everyone got there on Mexican time, and just 90 minutes over schedule, our groups’ 4 trucks made their way towards to beach. We stopped along the way to pick up firewood, making sure to only grab what we needed and only dead, dry wood. When visiting natural spaces, it’s important to use natural resources sustainably, firewood included. Upon arriving at the campsite we realized it was very trashed; beer bottles were littered everywhere along with washed-up ocean plastic. So immediately after arriving, we got to cleaning the site. Once we started it was hard stopping, everywhere you looked there was trash! That’s how the campsite cleanup morphed into the beach cleanup.

Courtney worked hard digging these ropes out from under the rocks! Go Courtney

Fernando carrying back one of many bags full of plastic waste

In just 3 hours we managed to clean up so much trash that the huge reusable bags almost filled up. Tired, hungry, and with the sun setting, we made a fire and called it a day. We spent the next few hours sitting by the fire, eating warm soup and carrot dogs, and enjoying each other’s company,

The next morning Fernando and I woke up to the full moon just over the ocean, it was beautiful and breathtaking. The sun soon came out and we all got up for coffee in reusable mugs and oatmeal in reusable bowls.  By 7 a.m. we, unfortunately, had to say goodbye to almost half our team who had to make it back to the US.

On Sunday, we tackled the south side of the beach, which we found to have more plastic than the north side. We picked up so much trash we had to stop after only an hour when we realized we wouldn’t have room to bring it all back.

But the work didn’t end on the beach. We had to make sure the trash went to the right place. So once all the trash was packed and secured into 2 pick up trucks, we drove it out to the town of Maneadero.

Our first stop was dropping off the landfill waste at the local town office, where a trash truck would be picking it up. The government official was very supportive of us and congratulated us for our efforts.

Finally, we dropped off the recyclables with Naro, owner of Pro-Recicla, a recycling business in Ensenada. Naro recently participated in a beach cleanup on the Todos Santos Island with Parley. The large reusables bags he lent us were from that cleanup, and I loved knowing these bags have been reused for much good. 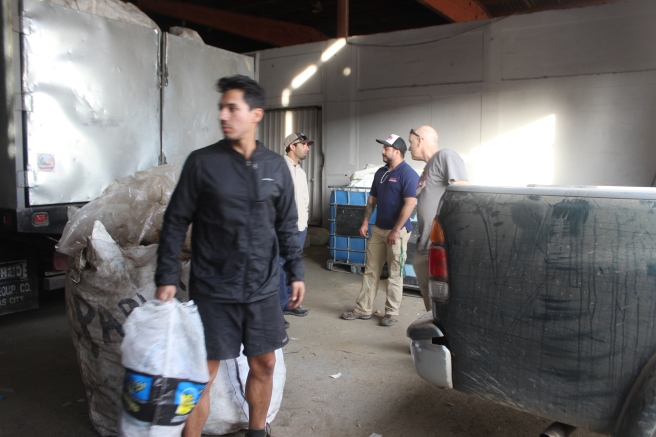 Organizing this cleanup was such a great experience. I think everyone left feeling empowered from making such a big difference! It was also great to hear from my aunt Sonia how she’s making more of an effort to reduce her waste. She said she’s definitely noticing it more! I hope that’s the case for everyone who went.

We’re planning on going back! Not only because we want to revisit this beautiful beach, but because there’s still much work to be done! Imagine how much we could pick up if it were 20 of us, or 30!?

We’re thinking of going back in late January. If you’re interested, please fill out this form to stay in the know. If you’re in the area, I hope you’ll join us!